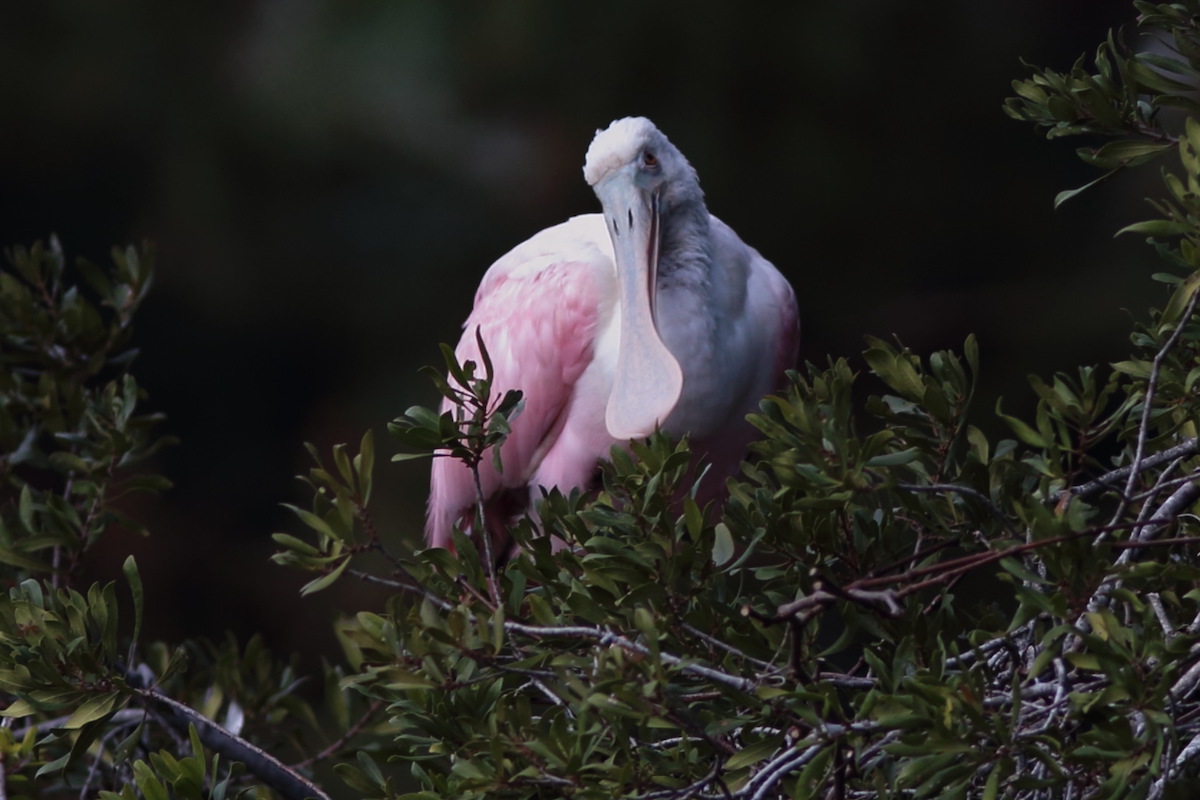 A rare—but unforgettable—sight on Seabrook Island, SC, Roseate Spoonbills wholeheartedly embrace the philosophy of thinking pink. If you have been lucky enough to spot a spoonbill in the Lowcountry before, you know that they are truly something to behold.

Resembling something out of a whimsical children’s book, spoonbills continue to migrate and establish colonies within our local ecosystem, making sightings more and more frequent. If you are as in awe of this rare species as we are, read on for more information and fun facts—plus, where you might be able to spot one on Seabrook Island.

Often mistaken for flamingos at a distance, these graceful wading birds are impossible to miss, with gorgeous pastel feathers and a splash of bright pink coloring across the front of their wings. Surprisingly, its rare coloring isn’t the spoonbills’ only distinguishing feature. They are also characterized by their long, flat, spoon-shaped beaks, bright red eyes, and striking yellow heads.

Roseate Spoonbills reside in coastal marshes, bays, and wetlands across the southeastern United States and South America. They tend to stick to shallow waters (both fresh and saltwater), nesting in trees and shrubs bordering the water’s edge.

Birds of a feather flock together, and, as very social birds, spoonbills often gather to form colonies of anywhere from 2 to 400 birds when feeding and nesting. Fun fact: a group of Roseate Spoonbills is called a bowl. However, they aren’t an exclusive species; spoonbills often coexist in colonies with other large water birds like ibises and herons.

Naturally, the first question that comes to mind is, Why are Roseate Spoonbills pink? Well, like flamingos, Roseate Spoonbills have a colorful diet. They primarily eat crustaceans and other aquatic invertebrates (like shrimp, fish, and prawns) that are rich in pigments called carotenoids.

As this nutrient is consumed in large quantities over time, the tint of the spoonbills’ feathers turns a deeper, brighter pink. Among the species, however, coloring can range anywhere from a pale pink to a magnificent shade of magenta.

Interestingly enough, the carotenoids that contribute to the Roseate Spoonbills’ pink hue are also found in carrots—and can affect humans, too! But not to fret, you would have to eat 10 or more large carrots a day for several weeks before your skin would develop an orange tint. 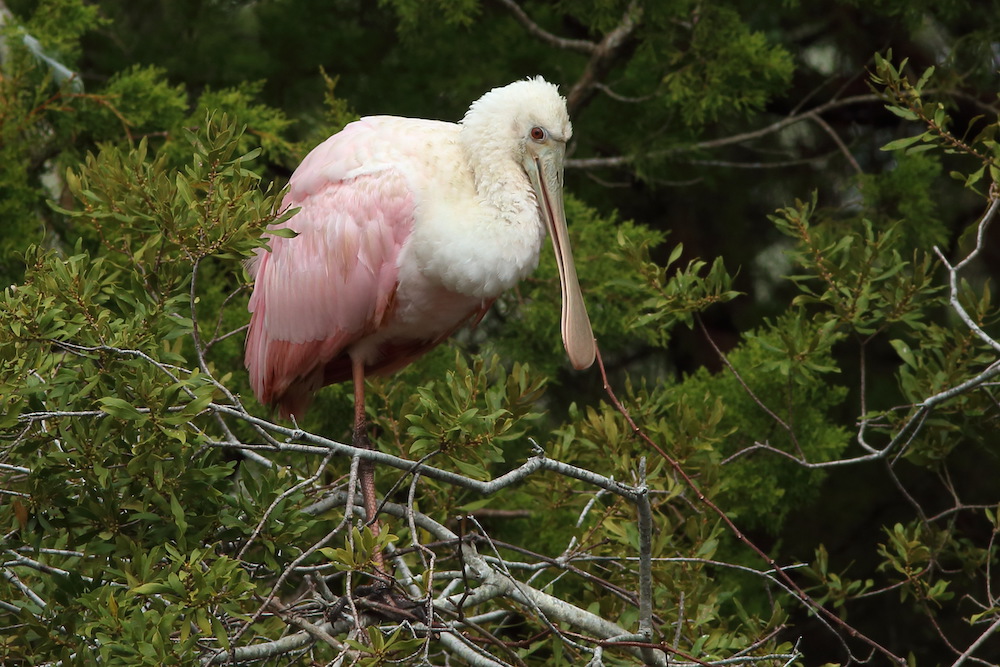 While most wading birds stab their beaks downwards to hunt, spoonbills keep their bills underwater and sweep them from side to side with fluid movements to scoop up prey rather than spearing it in sharp jabs.

Their spoon-like bills are filled with nerve endings that are highly sensitive to touch and will snap shut whenever something brushes against them. Because of this unique feature, spoonbills have earned a reputation for being nimble hunters.

As the weather begins to cool off, spoonbills begin preparing to settle down and start a family within their colony. Breeding occurs mainly during the winter months in Florida and spring in Texas and Louisiana. During courtship, males and females may first have aggressive interactions, however, once they warm up to each other, they can be tender creatures.

A traditional spoonbill love story starts with a male shaking a stick at his beloved to try and catch her eye. If she is interested in him, she will perch close to him. With their affections confirmed, the pair will then exchange twigs and intertwine bills.

Once the pair has mated, the male will then begin preparing for nesting, seeking out materials such as sticks, grass, and leaves to bring back to the female, as she puts together their new home up in a nearby tree.

After she has laid eggs, typically between two and four, they will take turns warming them for the next three weeks or so, until they hatch. Male and female spoonbills will continue to feed their young until they reach about eight weeks of age.

Newly hatched chicks lack the two most noticeable spoonbill features: their signature bill and their pink coloring. However, their bills start to flatten around nine days after hatching and are almost fully formed around a month later, once they have turned into fledglings.

As they grow older (and eat more carotenoids), their white feathers gradually become pinker, but they won’t reach their signature shade until maturity at around three years old. Scientists used to think Roseate Spoonbills only lived to be about seven years old until they found one during a recapture and release study that was almost 16 years old—over double the expected life span.

After the young fledge, they disperse away from their nesting territory. It is these birds we see on Seabrook Island. So why are these birds spending more and more time in the beautiful Lowcountry?

The most likely answer is climate change. As our winters grow warmer, the spoonbills that traveled here to escape the overcrowded feeding grounds farther south have less reason to leave our comfortable habitats and take to the ocean winds.

Large wading birds can be tricky to differentiate when they fly high overhead, but oftentimes we can still see their postures when other details are hard to make out. In particular, Roseate Spoonbills fly with their necks stretched out straight in front of them and their legs straight behind, moving with the flock in a diagonal pattern.

Other birds, like egrets and herons, typically tuck their necks up close against their torsos in the air. The solid pink underside of the spoonbills’ wings can also help you tell them apart from neutral-colored wading birds. Did you know that when spoonbills on the ground see another flock of spoonbills flying over, they will point their bills straight up in the air? This behavior is known as sky gazing.

Roseate Spoonbills used to be a common sight in the southeastern U.S., but their gorgeous feathers attracted dangerous attention. Plume hunters, seeking their feathers for hats and specialty fans, almost eliminated them from the United States by the 1860s. During the mid-1900s pesticides like DDT may have also had a disparaging impact on populations.

In the 1940s, however, spoonbills received legal protection from the millinery trade, and since then, populations have slowly recovered. Since the ‘70s, South Carolina has recorded small numbers of Roseate Spoonbill sightings, the two largest factors threatening spoonbills have been diminished.

However, one still remains: as coastal areas are converted into homes or agriculture, habitat loss occurs. It is this development of ecosystems that were once home to spoonbills that could be driving the population to new areas like Seabrook Island, SC. 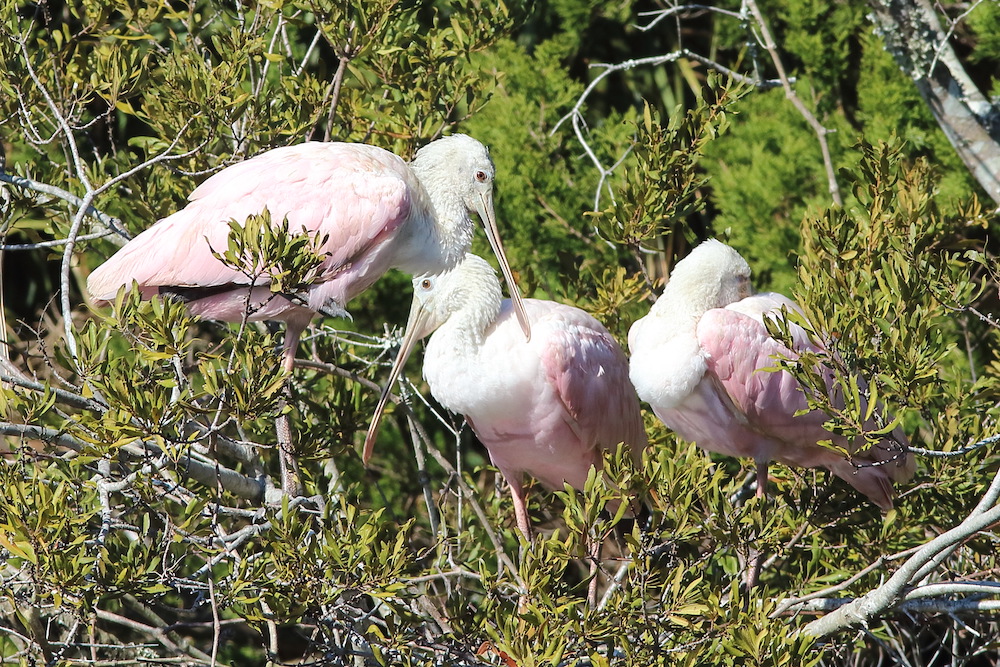 Roseate Spoonbill sightings on Seabrook Island have grown in frequency ever since they began in 2014, with the most recent occurring on July 11th on Creek Watch Trace near the fire station. Our Seabrook Island Birder Group has spotted immature birds (under the age of 3) in key locations all over our island, from Marsh Haven and Marshgate Drive by Cap’n Sams’ Creek, along the coast to the North Beach Lagoon, around to Camp St. Christopher near South Beach, and even slightly inland to Jenkins Point—around the bend from Bohicket Marina.

Summer is the best time to look for Roseate Spoonbills, although they have previously been sighted in the spring and fall seasons, too. The Birder Group recommends going over to Jenkins Road pond, one of the best locations for spotting Roseate Spoonbills, right before or after high tide. Put on a hat and sunscreen before you head out, and be sure to bring binoculars, a camera, and water. And, most importantly, please remember to follow the birding guidelines below!

Want to learn more about Roseate Spoonbills and the other species you see coasting around Seabrook Island? Consider joining the Seabrook Island Birders Group, a social and educational community for Seabrook residents—welcome to beginners and experienced birders alike!

Seabrook Island Club and our Birder Group are committed to protecting the wildlife and habitats our private seaside community is lucky enough to enjoy. In addition to Seabrook Island’s status as an Audubon International Sustainable Community, Seabrook Island North Beach is designated as a Critical Habitat by the U.S. Fish & Wildlife Service, meaning that it is essential to endangered or threatened species’ conservation. To protect our habitats, please follow these birding guidelines:

Our private, oceanfront community provides Seabrook Island residents and their guests with an experience that can’t be matched anywhere else in the Lowcountry. Come enjoy the unparalleled wonders of Roseate Spoonbills and many other native species for yourself!

This piece includes contributions from the Seabrook Island Birders.