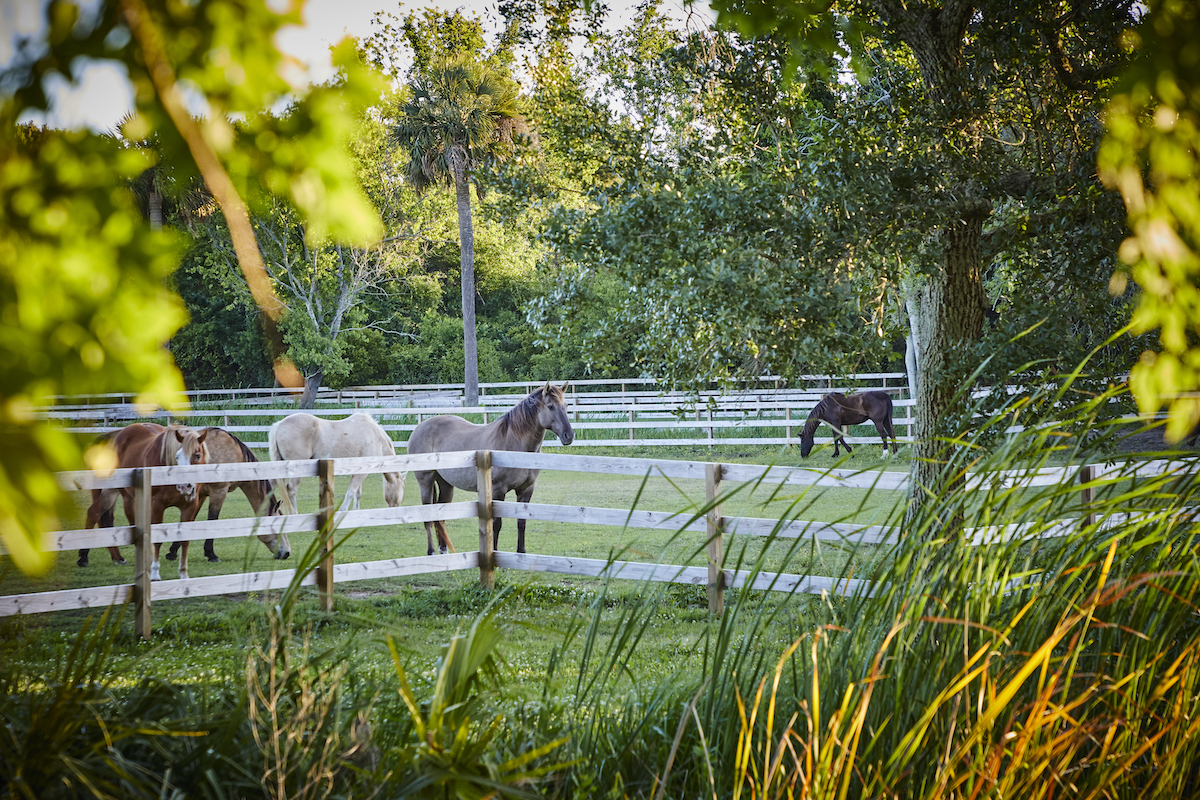 On any given afternoon, in the field closest to security, you can spot our herd horses blissfully grazing at the Seabrook Island Equestrian Center. This unique group of horses, specially trained for leisurely beach and trail rides, comprises all breeds, ages, and work histories. There is one in particular, though, that stands out from the herd. Meet Silky, our registered Carolina Marsh Tacky Outdoors (CMTO) horse.

Over the years, Silky has become quite popular among locals, earning features in several magazines and our very own Veranda publication. Guests from all over specifically request to ride Silky, or at the very least, hope to catch a glimpse of our girl. Visitors typically also have a variety of questions, most of which are nothing out of the ordinary, however, there have been a few that stumped us. Naturally, I was curious and decided to do some digging of my own to find the answers. I hope this article will give you a little more insight into this unique breed of horses that retreated to the Lowcountry, making their home along the marshes and sandy shores.

An Equestrian’s Guide to the Carolina Marsh Tacky

We are often asked about the genetics and particular characteristics of the Marsh Tacky horses. If you are a horse enthusiast, then you may already be familiar with the Carolina Marsh Tacky, which is also the South Carolina State Heritage Horse. In 2007, the Carolina Marsh Tacky Association was formed, and at this time, a DNA registry was developed by the Livestock Conservancy. Typically, the breed is measured between 13.2 and 15 hands, weighing in at 700 to 900 pounds. This is considerably smaller than traditional warmbloods, thoroughbreds, and other horses that we see grazing in the pastures at Seabrook Island Equestrian Center. The standard adult horse averages 14 to 17 hands and weighs in at 1000 to 1400 pounds, to give you some perspective. Marsh Tackies are solid in color with long thick manes and tails. Sometimes the horses will have primitive markings such as dorsal stripes and distinctive leg markings similar to those of a zebra.

Their thicker manes, tails, and hides help protect the horses from the environmental challenges of the Lowcountry, such as mosquitos, snake bites, thorns, briar patches, and the dense brush of the marshes. The thick hooves of tackies are solid, therefore they have few feet issues and do not require horseshoes. This is a very important trait, as maintaining shoes in the pluff mud and sand is challenging. Finally, the stamina of these horses is remarkable. They can maintain their energy levels over long periods and do not tire easily. Many attribute this to their unique “Swamp Fox” or “rocking chair” gait. Mississippi State University identified a gait unique to the Marsh Tacky as part of their Locomotive Research Program. Further studies are being done to research if there is a genetic difference in their lower legs/hooves, making this gait possible and maintainable. Given their genetic make-up, it is almost like the descendants of the Colonial Spanish breed that is now known as the Carolina Marsh Tacky was destined to call the South Carolina shoreline home.

Equally desirable to the physical make-up of the Marsh Tacky are the mental and temperamental qualities that continue to make this breed popular for numerous purposes. Common adjectives used to describe these horses are agile, brave, sure-footed, honest, and quick. Marsh Tackies are extremely easy to “break” or train compared to other equines. Known for their calm temperament, they easily accept the tack and eventually riders on their backs. As quick learners, their progress is relatively fast and can be built on quickly or over time, meaning tackies retain skills even if not repeated regularly. This quality is probably the most important trait that made the breed so desirable in its early history. The horses could be rounded up, used as needed, turned loose, and retain the skills learned until the next time they were needed. Marsh Tacky horses also seem to have less of the “flight” tendencies of other horses. They appear to be able to process situations and have a clear ability to “rationalize and solve” situations. This is evidenced by their ability to calmly free themselves from pluff mud by lying down horizontally and moving on their side. Other breeds in similar situations commonly panic dig themselves in deeper to the point of exhaustion. The calm demeanor and their ability to quickly learn and retain skills have made this breed quite versatile since being re-domesticated in the 1600s.

As part of our normal beach and trail rides, guests are often curious about the history of Seabrook and Johns Island. Questions about the role of horses, particularly the Marsh Tacky horses, in our history and development of the islands is common. These horses are descendants of the Colonial Spanish horses brought over to South Carolina in the 1500s. Ultimately, the harsh coastal conditions led to the failure of many of these colonies, and they were abandoned, as well as many of the horses. Where their human counterparts failed, the horses thrived under the subtropical conditions and resorted to the beaches and lush maritime forests along our coastline. The unique physical characteristics and temperaments allowed the feral horses at the time to survive off nutrients from marsh grass, moss, and other forage and hydration from rain and brackish water. Many other finickier breeds would not have been able to obtain the necessary nutrients they need from these resources, however, the Marsh Tackies proved to be a scrappy bunch until they were re-domesticated in the 1600s.

Early colonists trained them to work plowing the fields, herding cattle, and hunting. Later, the tackies were even used to carry children to school and deliver the mail. They were desired by the rich and poor alike and were commonly seen through the 1950s parked outside Gullah homes, as we see automobiles today. In times of war, the Marsh Tacky proved invaluable. Southern revolutionary troops were able to make great strides against the British in the swamps and marshes of the Lowcountry. Led by General Francis Marion, widely referred to as “Swamp Fox,” the tackies and their riders easily traversed the terrain that stopped the British in their tracks. In the Civil War, the Marsh Tacky horses were actually ridden off to war by their owners, unlike Northern troops, who were issued cavalry horses. The limited success by the South was often credited to the bond/relationship between the horse and soldier. As the men and horses along the South Carolina coast and its barrier islands left for war, these areas, including Johns Island, Seabrook, and Kiawah, were no longer considered safe and were, in essence, abandoned. This region sat dormant with a few small herds left to revert to the behaviors of their feral ancestors just a couple of hundred years prior. 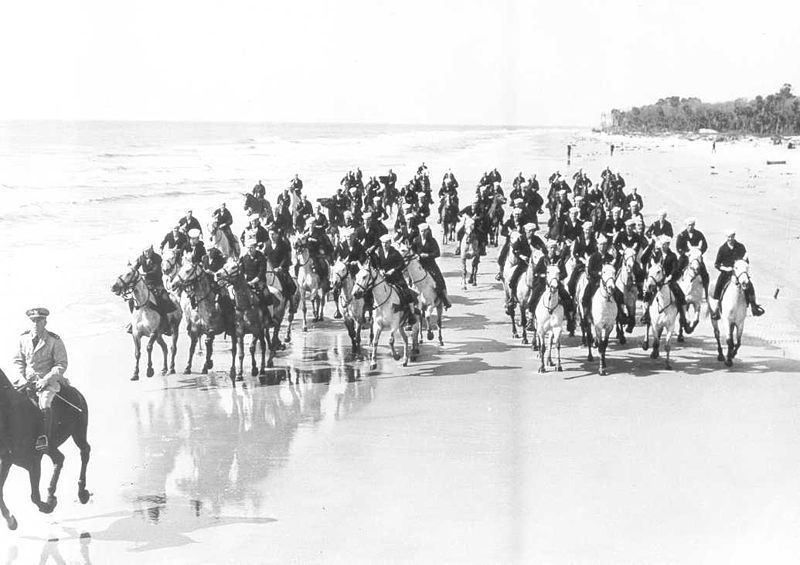 After the fall of the Confederacy, many of the Sea Islands sat quietly until permission was granted for resettlement. The return of residents to Johns Island also brought the return of the Marsh Tackies that had survived the Civil War. These domesticated horses were reunited with their feral relatives during the reestablishment of the island communities. These loyal and strong equines were used to plow and harvest the fields, hunt, and for local trade. As the rest of the country began to rely on steam and machinery, the Marsh Tacky helped the poorer population along the coast survive, and even begin to thrive after reconstruction. As villages and small towns began to pop up, so did the necessity for horsepower. These horses were the common mode of transportation and could be purchased for $50 to $75, depending on whether they had been broken in yet.

During World War II, the Marsh Tacky was again called to service. Domestic beach patrols, known as the Sand Pounders, routinely rode the shoreline keeping an eye out for German U-boats. In South Carolina, these patrols trained in Hilton Head before being stationed all along the state’s coastline. The popularity of the Marsh Tacky lasted along the South Carolina coast until the 1950s when affordable automobiles and farm equipment entered the market. At the same time, Arabian and American Quarter horses were also introduced to the coastal south joining the popular, less affordable, and less versatile thoroughbreds. The evolution and versatility of tackies made them a critical part of our regional development. By dividing the period of history into four general categories and highlighting their key roles, we can follow their journey from the beaches, through the Revolutionary and Civil wars, into reconstruction and the resettling of Johns Island, and finally to the modern-day Lowcountry.

From the 1950s to the early 2000s, the Marsh Tacky numbers sharply declined, with eventually only 400 being recognized through genetic DNA testing. Detailed records of these remaining recognized tackies became critical in the effort to save the breed that had done so much for our region. In 2007, the Carolina Marsh Tacky Association was formed, and in 2010, the State of South Carolina formally recognized the Marsh Tacky as the official state heritage horse. At the same time, a closed studbook was created in a further effort to guarantee the integrity of future tacky generations. Today the Coastal Discovery Museum highlights the Marsh Tacky story with two resident horses and a permanent exhibition is on display. These groups, as well as many others, are working hard to promote the breed and show their diversity. In addition to their traditional farming and hunting roles, tackies are now being trained as show horses for therapeutic riding programs and trail horseback riding, Charleston, SC programs like the Seabrook Equestrian Center. 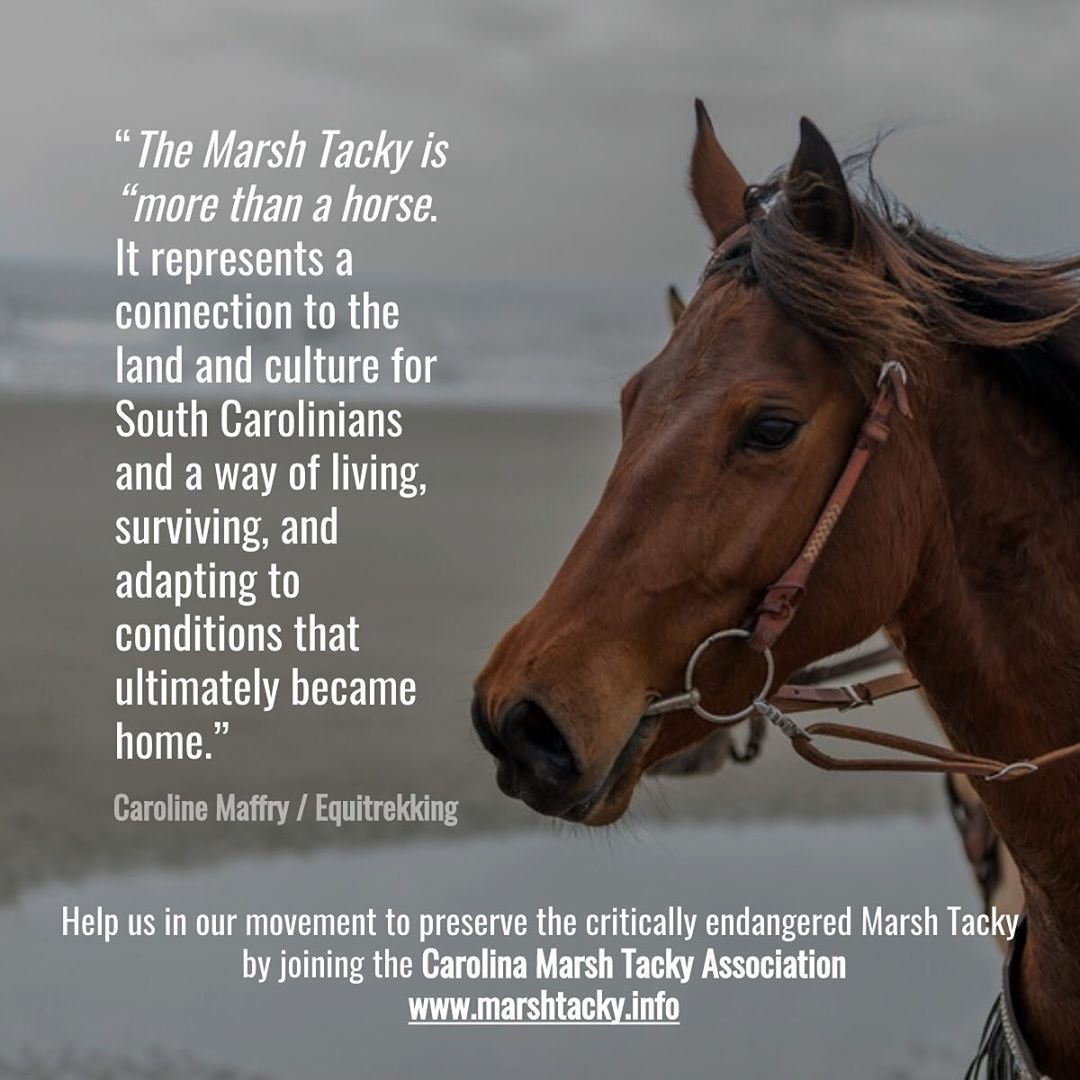 Here at the Seabrook Equestrian Center, we are proud to be home to CMTO’s famous horse, Silky. We are also thrilled to welcome our newest herd member and registered Marsh Tacky, Belle. Like Silky, Belle is also grulla in color, with a dorsal stripe and leg markings. Belle is nine years old and measures 14.2 hands. We look forward to Belle’s addition and educating our members and guests about her breed’s importance to our rich history. If you would like to meet Silky and Belle, or any other members of the Seabrook Equestrian Center herd, book your appointment for horseback riding, Charleston, SC! We cater to riders of all skill levels and ages with guided trail rides, pony rides, and riding lessons. Our full-service center is also one of the few places on the East Coast that offers horseback riding on the beach in Charleston, SC. Come enjoy the laid-back Lowcountry lifestyle today!