Just about everyone knows the game of tennis, but what about pickleball? Pickleball, a game that was originally created in 1965, has been catching on lately and is now one of America’s fastest growing sports. In the United States alone, there are more than 2 million players!

The game of Pickleball was created by and for families; it combines elements of ping pong, tennis, and badminton to create a sport that is accessible to people of all ages. Rather than using a full-sized tennis court, pickleball is played on a badminton court with a lowered net. Players use special lighter-weight paddles and play with a wiffle ball. These modifications make the game more inclusive for children and adults alike.

So how do you play? 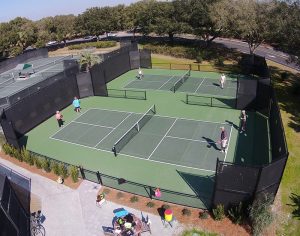 Pickleball combines rules from all three of the games from which it originated, but it is probably most similar to tennis. To begin the game, the server tosses the ball in the air and serves diagonally, but the ball must make contact with the paddle at waist height or below and the serve must be underhand.

There is a 7-foot non-volley zone on either side of the net, which was implemented to prevent players from spiking the ball. If they wish to hit the ball in this section, they must first wait for it to bounce. Like table tennis, the game is won by the first side to reach 11 points and lead by 2.

View the official rules of how to play Pickleball from the inventors of the game.

It is a simple game to learn, but Pickleball is not just for children or new athletes! Plenty of Seabrook Island residents use the game to get their dose of cardio and to compete in tournaments around the area.

Interested in learning more about how to play Pickleball? Seabrook Island has a Pickleball program open to players of all ages and skill levels. You may choose to drop in, reserve a court, or book time with an instructor to practice your skills. Contact Seabrook Island Racquet Club today to get into the game!