Among many other things, living on Seabrook Island means getting to see coastal wildlife on a regular basis. Residents can enjoy being part of a community that welcomes domesticated animals as well. If you’ve ever been curious about what sorts of animals on the beach you’ll find on Seabrook Island, we have the answers to your questions.

Animals on the Beach 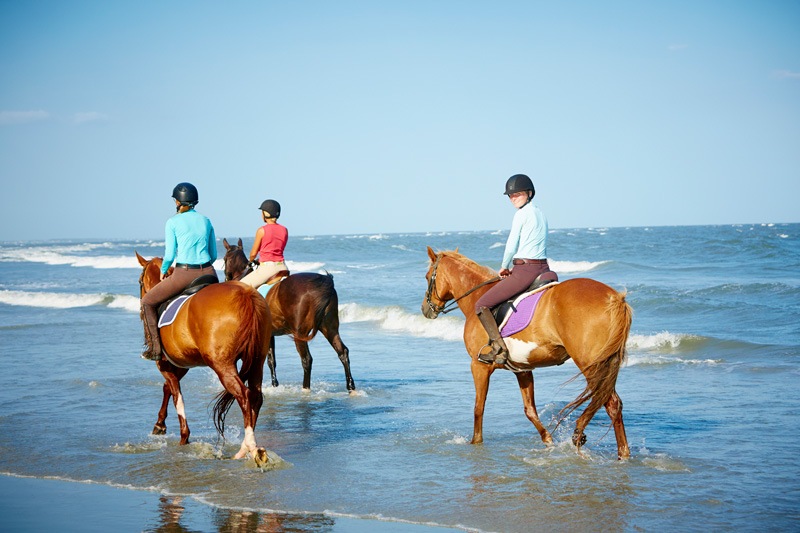 Seabrook is known throughout the Lowcountry for its beach rides. The Seabrook Island Equestrian Center offers two types of beach rides: advanced beach rides and walking beach rides. Both of these tours the North Beach area, but the advanced rides require at least three years of riding experience, while the walking beach rides have no experience requirements. The schedule varies by the tides; contact the equestrian center at (843) 768-7541 to make a reservation or get more information.

Seabrook Island has one of the few beaches that allows dogs to be off-leash at any time during the winter months. On the side closest to Captain Sam’s Inlet, there is an area locally known as the “Dog Beach” where dogs can be off-leash before 10 am and after 5 pm in the summer months (May 1 through October 31) and off-leash at all times from November 1 through April 30.

Seabrook Island is fortunate to be one of the places along the Atlantic coast that loggerhead sea turtles visit to lay their eggs. From May to around the middle of August, you can find clutches of loggerhead turtles and you may even see a few hatchlings making their way to the ocean.

Although an alligator or two has been spotted on Seabrook Island’s beaches before, you’re much more likely to encounter bottlenose dolphins playing in the surf. If you want to see bottlenose dolphins feeding, head to Captain Sam’s Inlet when the tide is low.

Gray foxes can be difficult to distinguish from red foxes (both of which have been spotted on Seabrook). In contrast to the red fox’s white-tipped tail, gray foxes have a black-tipped tail. They can also climb trees to get away from predators like coyotes and dogs.

Bobcats are found all along the Coastal Plain in South Carolina. Although they prefer forested areas with dense cover, areas like Seabrook that have cleared and forested sections can support bobcat populations.

Coyotes’ relatively high tolerance for human activity means that they are spotted more often than many other kinds of wildlife on Seabrook. These shepherd-like animals weigh an average of about 40 pounds and live 7-14 years.

Alligators are regularly found in and near the waters on Seabrook Island. If you see one, do not attempt to feed it or move closer. Additionally, keep small children and pets away from the edge of lagoons and ponds. For more information on alligator safety, take a look at this alligator safety article from the University of Georgia. 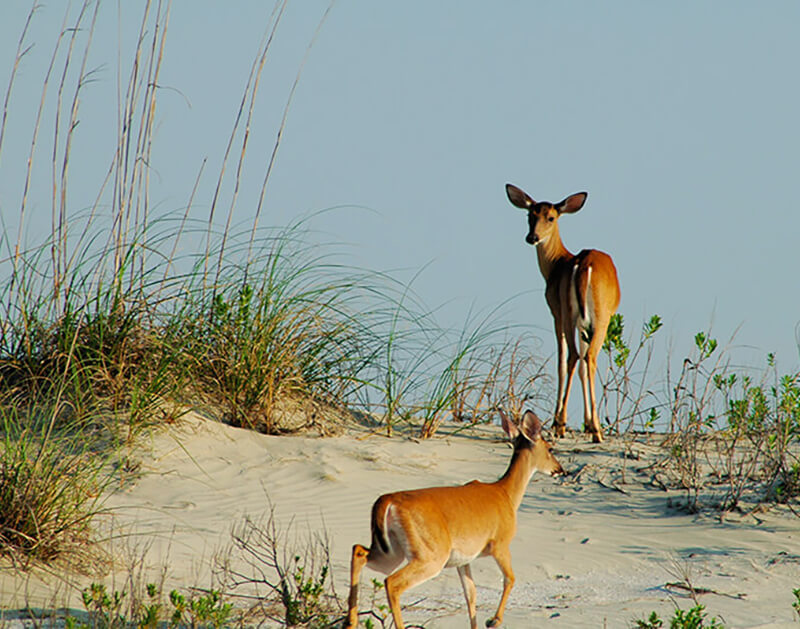 If you were to see the same white-tailed deer in spring and winter, you might think you were seeing two different species of deer. In the spring and summer months, white-tailed deer have short, reddish tan hair. This lightweight coat is traded for a heavy, grayish or bluish tan in the winter.

If you happen to see a fawn that you think is alone, let it be. Its mother has likely not abandoned it, but she may if you touch it.

With more than 80 species of birds regularly seen on our island, Seabrook is the place to be for birdwatching. Like many places in the Lowcountry and along the coast, you’ll find egrets and pelicans. However, bald eagles, piping plovers, and even turkeys can be found on Seabrook!

Because we so many unique species of birds frequent the island, residents have formed the Seabrook Island Birders Group. This group goes on bird walks and reports on interesting bird sightings.

For more on how to safely enjoy the presence of animals on the beach, view the details of Seabrook Island’s beach rules. And, if you see some wildlife that deserves more attention, fill out a wildlife sighting form!